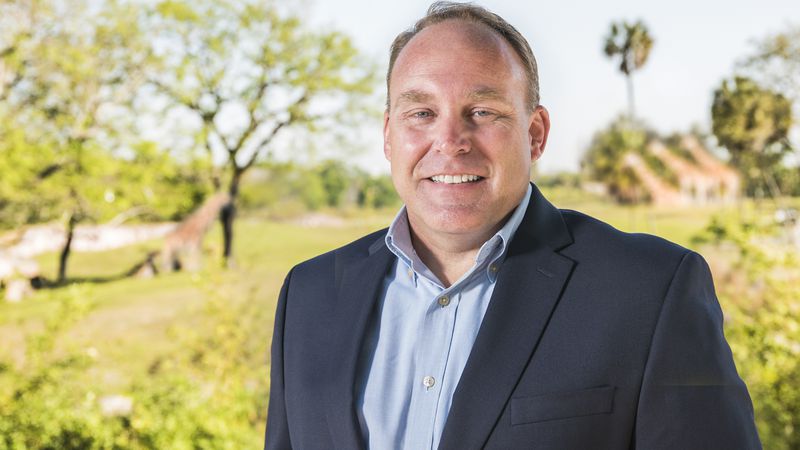 Before Busch Gardens undergoes a change in leadership, with Six Flags alum Neal Thurman taking over the Tampa theme park on Sept. 8, we sat down for an exit interview with Stewart Clark, who has overseen the park since 2017. In his time he has opened new roller coasters, shepherded the park through reopening during a pandemic and developed a friendship with a giraffe named Cupid.

Clark, 56, is a long-time executive with parent company SeaWorld Entertainment and was part of the team that in 2000 opened Discovery Cove, a tropical nature theme park with a free-flight aviary where you can swim with dolphins. He’s moving back to Orlando to take over the new position of senior vice president of Zoo Commercial Operations for SeaWorld Entertainment.

Like all theme park operators, the company is hurting this year because of the pandemic. SeaWorld Entertainment, Busch Gardens’ parent company, recently reported a 95 percent revenue drop. But the water was already rough well before the pandemic for the company that Shamu built.

SeaWorld was rocked by declining attendance after the Blackfish documentary in 2013 raised questions about its treatment of orcas. That criticism, coupled with the record-breaking success of rivals at Disney and the Harry Potter land at Universal, saw a long slide in attendance and revenues.

The company had started gaining ground in recent years, thanks to new attractions and rides that had nothing to do with sea creatures. And SeaWorld still aims to shore up its reputation among animal lovers. That’s where Clark’s new gig comes in.

Related: SeaWorld was on track for a record year, and then the pandemic happened

Instead of helming one park, he will be overseeing zoological activities and experiences for all the company’s seven theme parks and five water parks. In addition to highlighting the company’s 50-year legacy of animal rescue, he will be looking for new “animal experiences” that will bring visitors closer to the critters in their care.

Here are some highlights of our interview on his last week.

So this is a new position, how come?

As we talked as a company about what are our strengths, it’s our commitment to the world and our zoological collection. We wanted to put more focus on that. Discovery Cove was one that resonated. It’s a park we are so proud of, and its programs have been able to give people up-close experiences with animals. As we look at the rest of our parks, people want to find ways to see animals in a much more up-close way and with more meaningful experiences.

Zoos have certainly changed over the decades, from caged animals to vast new habitats. Do you see a new trend emerging?

I do believe there is a next wave coming in this where they value interactions that people have with the animals. We found that with Discovery Cove but also on a smaller scale.

Like just recently we rolled out our sloth tours and sloth experience, where people can go back and learn about what goes into the care of sloths and it gives you a moment to actually be very close to a sloth. Maybe 10 or 15 years ago a lot of zoo people would be like, meh sloths? But people love the sloths. There’s probably other opportunities here.

Related: You can take a sloth yoga class, but some say you shouldn’t

There are so many animals that you wouldn’t even think people would love the experience of getting close to. Everything from snakes to lizards to fish. There are fish at Discovery Cove that are so interactive. My favorite is the scrawled filefish. When you go there in the morning the filefish will swim up to guests and actually squirt water out, they are soliciting that attention. It’s fascinating. As far as the care goes, I know you are going to think I’m going off the deep end, but we have fish that need eye drops. We have fish trained to come into the aquarists hands and it presents itself on its side and they are able to treat the fish with eye drops and off he swims.

But there are critics who say you shouldn’t be using animals as entertainment. What do you say to that?

When you are actually there and see how guests are connecting with animals, that’s when you see people take it to the next level. We’ve got a young lady who works here who experienced the park as a camper as a young child and she is now an animal professional. We have Cara Martel, who has been recognized as an emerging conservation leader, and there are only about 30 of those worldwide. Cara dedicates all her time to travel the world on her own and with projects we’ve sent her on, to care for white rhinos and other animals that are truly imperiled. People visiting Busch Gardens don’t realize that’s going on. Sometimes our detractors forget the peril these animals are going through in their natural habitat.

Analysts have said this position appears to be a way to rehab the company’s reputation among animal lovers. Is that too cynical?

Well I would say the people who are detractors of zoo and aquariums are not animal lovers. The animal lovers are working in zoos and in aquariums or visit zoos and aquariums. This position is how do we deliver that next level experience that really creates that memory.

The company has delayed the opening of big new attractions until next year. It must kill you that the next Busch Gardens president gets to open the Iron Gwazi coaster.

Within the first month of getting here I was getting letters complaining that the big wooden roller coaster wasn’t running that day. (It has been closed since 2014). But unless we invent a time machine…

The hybrid wooden and steel coaster coming to Busch Gardens will become North America’s tallest hybrid, and also the fastest and steepest hybrid coaster in the world. It will stand more than 200 feet tall and contain restored elements of Gwazi, the wooden roller coaster that it is replacing. Gwazi closed in 2015. [ BUSCH GARDENS | Busch Gardens ]

So we fell in love with the concept of a hybrid coaster (which uses the wooden base of the old Gwazi coaster and new steel high-speed roller coaster). It is going to be the best coaster, not only of the year but it will always be in the top four or five on any list. While I won’t be the guy running the park when it opens I can tell you the biggest, baddest coaster around is going to be Iron Gwazi, it’s absolutely spectacular.

What’s it been like to reopen in a pandemic?

It’s kind of a weird phenomenon. People thanked us for being open. But people have their own opinions about wearing masks. We’ve done our best to be super strict on that and we believe in it. If you come to the park you have to wear a face covering. But as families are struggling through this time you still need time to break away. You can’t sit home and worry 24/7. And that’s the magic of theme parks. That’s why Busch Gardens exists. Because the family needs a place to go. I’ve loved the last couple of months watching families connect. And gosh, it feels like it’s needed now more than ever.

Finally, do you have a best animal friend at Busch Gardens that you’ll miss in Orlando?

If I said that they’d all be jealous right? The cheetahs are pretty awesome and the orangutan team gave me a picture the orangs had marked up. The little guy Malu was in a key developmental phase as the shutdown occurred and you’d see him looking around like what is going on?

But there’s a giraffe named Cupid who is a just a real sweetheart.