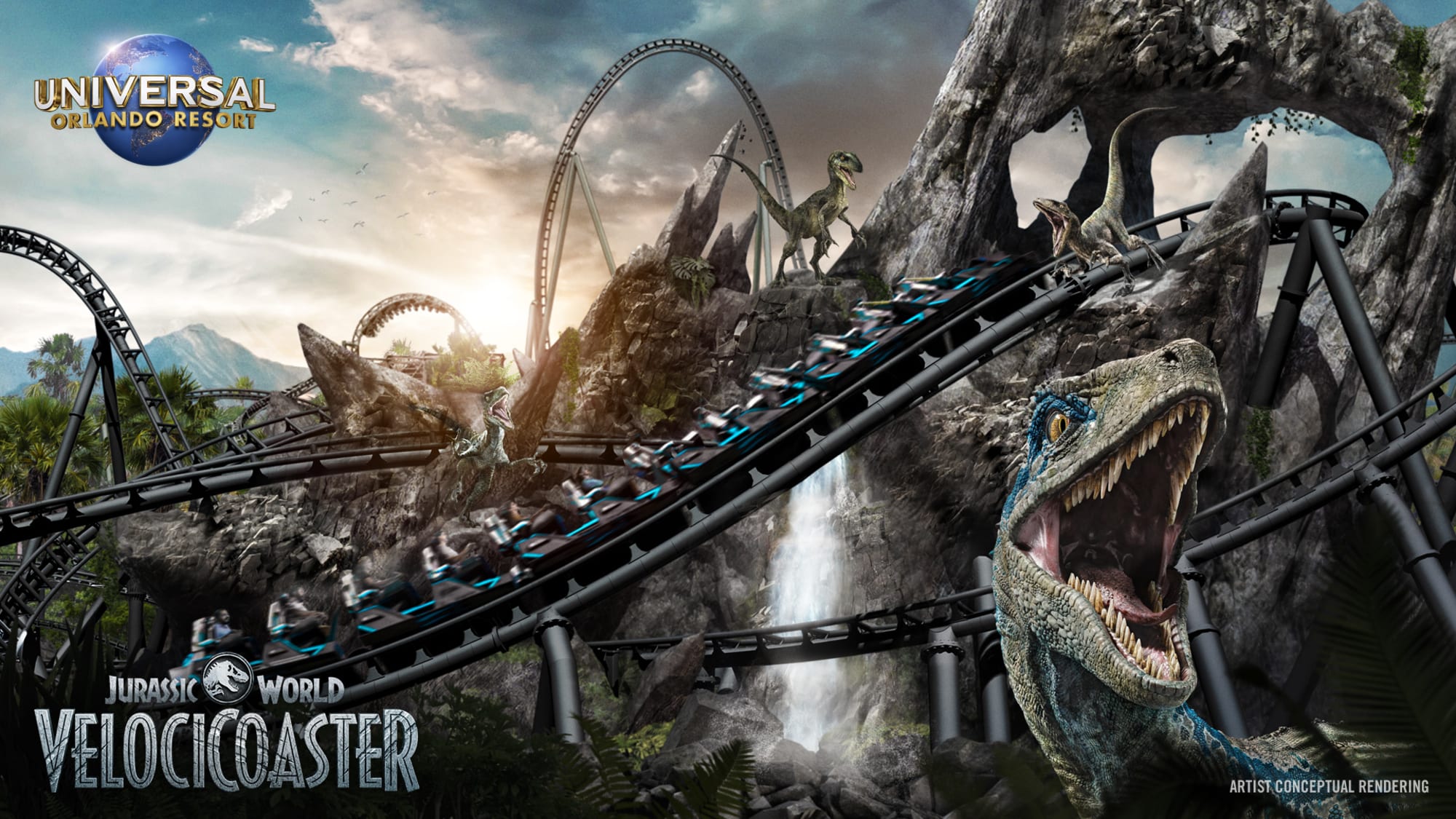 Universal Orlando confirms the Jurassic World VelociCoaster will be the ultimate thrill adventure.

Can you survive the Jurassic World VelociCoaster? As the track started to soar over the sky at Universal Orlando Islands of Adventure, everyone wondered when the official announcement would come and how this new Jurassic World experience would come to life.

With the recent announcement, Universal Orlando and Amblin Entertainment blend thrills and storytelling into an epic experience. Are you prepared to face the Apex Predator of thrill rides?

Joining the Jurassic Park experiences will be the new Jurassic World VelociCoaster. As the first coaster based on the movie franchise, thrills are just part of the experience that will lure guests to brave the extreme heights and speeds.

According to Universal, the original story will bring together the original cast of the films, including Chris Pratt, Bryce Dallas Howard, and BD Wong. The VelociCoaster is part of the “carnivore expansion.” As riders brace for the thrill, a Velociraptor pack will be chasing them through every twist and turn.

Check out this simulated video of the ride experience.

The blending of story and thrills sets the Universal experience apart. As seen in Hagrid’s Motorbike Adventure, guests have fallen in love with the immersive experience as much as the extreme speeds. It brings the beloved characters off the screen and into the real world. While the adrenaline thrills are expected, the story brings people back time and again.

Since the new attraction is a thrill ride, many roller coaster enthusiasts will be counting the days till the first ride car leaves the station. As Universal Orlando’s tallest roller coaster, the track hits heights up to 155 feet. As that peak looms over the theme park’s sky, can you feel your stomach drop in anticipation?

In addition to the heights, the coaster features a 360-degree barrel roll above the Islands of Adventure lagoon. While there may or may not be a creature lurking in that water, the idea of being suspended in that location adds to the rush.

With two launches and speeds up to 70 mph, the VelociCoaster might take your breath away. From the “Top Hat” maneuver that makes people feel like they are coming out of their seats to zero gravity experiences, each twist and turn brings another thrill until the car eventually stops in the station.

The Jurassic World VelociCoaster is an ambitious project for Universal Orlando. While guests have watched the attraction take shape over the Islands of Adventure lagoon, there was much speculation over the official announcement and opening date. While some people might affectionately refer to this attraction as the churro stand or a churro delivery system, the real attraction details are more appealing than any sweet dessert.

Still, the wait for this new attraction will build anticipation. With the opening date coming in Summer 2021, both the excitement and fear will continue to grow. Until then, guests can enjoy the Jurassic Park Adventure, Raptor Encounter and, for younger guests, Pteranodon Flyers.

Do you think that you can handle the Apex Predator? The Jurassic World VelociCoaster will be waiting for those who could tame it.

What is your favorite Universal Orlando attraction? Do you think that this new coaster will the most popular?