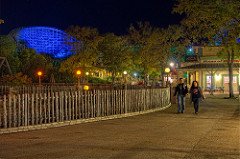 With vast lands and military presence, you might think San Antonio, Texas is a dull place. Read on and discover why millions of tourists visit this city annually.

San Antonio is the second largest Texan city and seventh largest in the United States. It is the gateway to the American Southwest. It is home to over 1.3 million people and attracts about 26 million visitors and tourists annually.

Paseo del Rio or the River Walk, is a creative genius of the 1920’s. This network of walkways runs along the San Antonio River and is one level down the main streets of downtown San Antonio. Built as an alternative to a paved over walkway over the San Antonio River, architect Robert Hugman designed a plan toward both commercial development and flood prevention. The result is an intricate pedestrian street a step below downtown San Antonio’s vehicles street now lined with bars, cafes and shops, forming an important part of the city’s urban life.

The Six Flags Fiesta Texas is a seasonal theme part sitting on a 200-acre land in an old San Antonio quarry. Taking almost two years to construct, this theme park is more than just rides and fireworks display. With the White Water Bay, its water theme park, music shows and laser shows at nights, it is a truly different amusement experience for people young and old. The Fiesta Texas’ themes and parks are renovated periodically for a fresh new look and feel.

SeaWorld’s shows use top of the line 4D graphics and animation in giant screens for an even realistic feel. Locals and tourists alike, young and old, first timers or old timers, all love the shows.

The McNay Art Museum is a hub for art buffs in Texas. Built in 1950, it is the first modern art museum in all of Texas. American art teacher and painter Marion Koogler McNay is credited for this museum. Her 24-room mansion of a Spanish Colonial Revival style sitting on a 23-acre of land with broad lawns, a Japanese-inspired pond and garden and landscaped fountains was half of her original bequest.

The other half is her extensive and important art collection. The museum’s collection now include 19th and 20th century American and European art pieces from famous artists like Pablo Picasso and Diego Rivera. Now at about 14, 000 art pieces, the McNay Art Museum’s collection is the finest of Contemporary Art and Culture in the US Southwest.

The people of San Antonio, Texas have plenty to be proud of. Apart of its rich cultural heritage and diverse population and its wealthy oil industry which saw millionaires among them, one of NBA’s more successful teams in the league’s history calls it home. The San Antonio Spurs is a Texan attraction themselves.

For more information on Sanantonio Hotels and Sanantonio Attractionsplease visit our website.

Owner & Publisher I've been around since day one. Can't believe we've been together for over 17 years! Thank you for making ThrillNetwork an amazing experience. What an awesome ride!!!
NEWER POSTAffordable Walt Disney World Vacation – Tips On How To Take Your Family On A Fun Vacation
OLDER POSTTop Tourist Hotspots in Asia For Children
Privacy & Cookies: This site uses cookies. By continuing to use this website, you agree to their use.
To find out more, including how to control cookies, see here: Cookie Policy