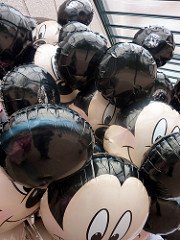 A family vacation in a Disney theme park or Disneyland is always a dream holiday for millions of people around the world. The Disney brand is such a resounding success worldwide that it is inconceivable that any child in any developed country do not know what is Disneyland.

If you are living in Asia and if Orlando or Paris is too far away to take your family for a Disney vacation, then you can settle for either of the 2 Disneylands in Asia located in Tokyo and Hong Kong.

Disneyland, wherever they are located usually have more or less the same theme. Afterall, those are Disney’s well entrenched trademarks aren’t they?

For example, in Disneyland Tokyo will find the following theme parks which can be found on other Disneylands albeit sometimes in different presentations.

World Bazaar – Sprawling smack at the entrance of Tokyo Disneyland is the World Bazaar. This Bazaar is a reminiscent of turn of the old American town with the feeling that you may come face to face with an Sioux Red Indian or an outlaw bandit wanted by the local county sheriff.

Here you will find restaurants, shops, outlets selling souvenirs and stuff that are appealing to tourists who wants something to remember their vacation there.

Tomorrow land – A space age futuristic theme park. A delightful combination of science and innovative imagination. In Tomorrowland, you can enjoy rides that rockets you to outer space or if you are a science geek, get invited to the “Inventor of the year award ceremony.”

One of the favorite rides in Tomorrow Land is to help Buzz Light Year pulverize the Evil Emperor Zurg. Whatever that is.

Toon Town – Bring your kids to Toon town and they will love you happily ever after. Toon Town is where Disney colorful characters work and play. Toon town is designed to cater exclusively for the kids and is bursting with colors with plenty of kiddy rides.

Fantasy land – How can one be in magical Disneyland without entering the world of fairy tales and cartoons? Meet Disney’s mighty icons such as Mickey Mouse, Snow White and the Seven Dwarfs, Donald Duck, Cinderella, Peter Pan, Captain Hook and a host of Disney cartoon characters.

Critter Country – This is the land of the, well, what else, you’ve guessed it, Critters. The critters are small animals from the Disney movie “Song of the South”.

Enjoy watching the critters burrowing little homes along the banks of the Rivers of America and on the slopes of Splash Mountain.

Western land – A visit to the Wild Wild West brings you back in time to the earliest settlers of the American West. Perhaps the most important chapter of the American history. Enjoy dinning in restaurants from the wild west era.

Adventure land – This is the where you visit the African, South American and Asian rainforest. You can even take a cruise in a “crocodile infested” river. Tropical jungles in downtown Tokyo? Well, this is what Disney magic is all about isn’t it?

Chris Chew is an avid traveller. More travel articles at Bollywood or Hollywood? and Vacation Yunnan

Owner & Publisher I've been around since day one. Can't believe we've been together for over 17 years! Thank you for making ThrillNetwork an amazing experience. What an awesome ride!!!
NEWER POST5 Best Places to Stay in Branson Missouri (Mo) {image]
OLDER POSTAffordable Walt Disney World Vacation – How To Plan A Vacation Package You Can Afford
Privacy & Cookies: This site uses cookies. By continuing to use this website, you agree to their use.
To find out more, including how to control cookies, see here: Cookie Policy