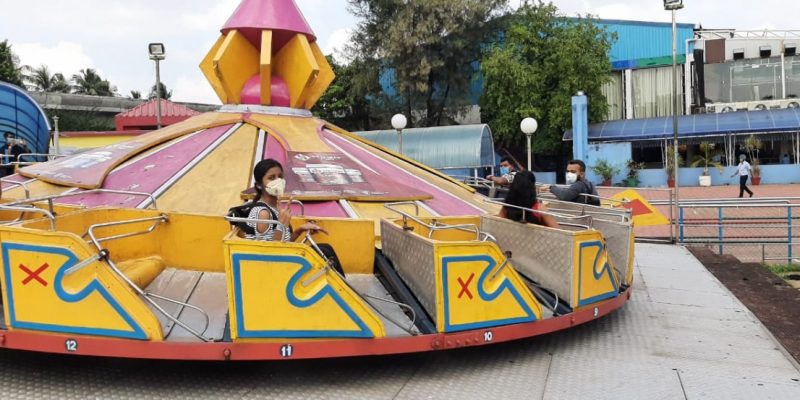 Chennai: The Indian amusement park industry that directly employs a minimum of 80,000 persons is in limbo with job losses, pay cuts and small parks that have shut permanently. Following their unprecedented closure amidst the COVID-19 pandemic, the industry is opening up in phases, struggling to draw crowds in a new ‘normal’ with increased expenses, safety and health regulations along with reduced operative hours and limited tickets.

Amusement parks, the annual hub for thrill-seekers, have always meant heady adventures, screams of excitement and people emerging giddily from roller-coaster rides. As per the unlock guidelines, children below the age of 10 and adults over 65 have been advised to stay at home. Theme park authorities are now grappling to protect their patrons, staff and also find the right recipe to draw visitors. The new normal has meant online pre-booked admissions, bright markers showing where to stand, social distancing and temperature screening of all visitors and employees at the entry point. Park operators are also pushing for contactless transactions with food orders and menus on apps.

Around 112 permanent and 115 contractual employees of the Aquatica Theme Park in Kolkata had not been paid from May to July. The water park, which was shut from March 15, reopened on October 21 and has so far witnessed 30 visitors per day at the maximum.

He said struggling would be an understatement to describe the park’s condition. “The last seven months have been spent tirelessly working to ensure our staff remain [employed]. After six to seven months of being homebound in these challenging times, people desperately want to unwind. But this respite is going to be short-lived as the bare minimum footfall will start to decrease by the end of November.  Running a theme park has never been easy. A large portion of the cost goes in land acquisition, operations, equipment, manpower, labour and maintenance with safety as a priority. We work on thin margins, besieged by multiple clearances and taxation,” he said.

Also Read: COVID-19 Has Pushed the Indian Economy Into a Tailspin. But There’s a Way Out.

‘Job losses have become the norm’

A skeletal staff continued to be at work through the pandemic at Nicco Park in Kolkata, which was used as a quarantine facility from May 29-October 6. The park, which reopened on October 16, is planning to introduce virtual shows. “In a non-pandemic scenario, we would have witnessed at least 3,500 visitors per day during this season. But our current peak has been 350 guests during the Durga Puja week, with the majority of them in the 35-40 age group, following which the count floundered,” said Sumit Dutta, Nicco Park’s general manager (HR).

Goutham N, business development executive of GRS Fantasy Park in Mysuru says that though entry fees have been slashed, there have hardly been 40 visitors per day. Rides are running at less than half the capacity. We haven’t made the water rides operational as yet. Everybody in the organisation has taken pay cuts. Job losses have become the norm in the industry as we receive vacancy enquiries from other amusement park workers almost every other day,” he said.

Giant entertainment parks that thrive on novel attractions, games and rides are opening up in phases, moving forward cautiously. A major drop in revenue has also stemmed from season pass-holders, the loyal breed of customers. However, theme park insiders have also pinned their hopes that many families might choose to go to local amusement parks instead of travelling somewhere. The Ministry of Home Affairs had allowed the opening of entertainment parks in non-containment areas from October 15, for which the standard operating procedure was issued by the Ministry of Health and Family Welfare.

Temperature screening of visitors at the Nicco Park in Kolkata. Theme parks were non-operational from March 16. Photo: Nicco Park

Amusement parks in Maharashtra are among the ones waiting for the state government approval to reopen. Dhimant Bakshi, joint CEO, Imagicaaworld Entertainment Limited, said the amusement park industry needs to be acknowledged by apex government bodies as a sector that helps build the social fabric by ‘promoting family bonding and digital detox’. “The vast open space of amusement parks serves as a perfect outlet for enjoying outdoors and the associated health benefits that come with it. In addition, each park serves as a source of direct and indirect employment for the local populace. What’s important from the industry perspective is that basic operational upkeep of amusement parks, especially ride maintenance is expensive, even more so after being inoperative for eight months. When we resume park operation, safety standards and entertainment quotients have to be provided in the right balance without going overboard. We will be functioning at 40% of our installed capacity along with all the standard ICMR and WHO prescribed guidelines on Imagicaa’s reopening,” Bakshi said.

‘Should have been opened earlier’

The VGP Universal Kingdom in Chennai re-opened on November 10 after the Tamil Nadu government allowed amusement parks to resume with 50% seating capacity. V.G.P. Ravidas, the park’s managing director, says amusement parks should not have been clubbed with theatres as part of the unlock regulations. “We have an edge over indoor sources of entertainment. With large open spaces and plenty of green cover, the conditions are conducive for social distancing. Each amusement park is easily spread across 30-40 acres. When people can throng major commercial streets in the city without social distancing or masks, the government could have definitely considered opening up amusement parks which assure controlled access, safety precautions and trained personnel to safeguard,” he said.

Ravidas said that the actual capacity of visitors for their park, spread over 46 acres is 50,000. “But even on peak days, we don’t witness more than 2,000 persons per day. November onwards, it is a lean season anyway. We are operating only 30 out of the 37 rides. But the bigger issue is the colossal labour pool that has been impacted, including those in security, housekeeping, landscaping, operations, food courts and construction among others. Each park functions with the help of at least 100 migrant labourers. There will be an enormous manpower crunch as many of the migrants haven’t returned from their native places. Smaller parks in Kerala have shut for good and the ones in Udhagamandalam (Ooty) are on the brink with zero revenue from tourists. Only if the parks are fully functional and back to business, will the livelihood of many be revived,” he said.

Unless there is a recovery plan in place, the industry is a step away from a massive economic downturn. Rajeev Jalnapurkar, the director of Ramoji Film City in Hyderabad, said, “Amusement parks generate a lot of indirect employment in the surrounding local communities. The economic blow on the industry has a ripple effect on the workforce of other allied businesses like hotels, transport, artisans, among others. Since the lockdown, parks have only retained minimal, outsourced staff. There have been huge layoffs. Most major parks have tried to retain their staff on payroll with salary cuts. With nil revenue, few mid-to-small size parks, business organisations related to amusement parks and indoor amusement centres most likely will not re-open,” said Rajeev, who is also the vice-chairman of the Indian Association of Amusement Park and Industries (IAAPI), an apex body representing the interests of amusement parks, theme parks, water parks and indoor amusement centres.

The IAAPI had sought government intervention, including a stimulus package, to deal with the impact of the pandemic. According to Ajay Sarin, chairman of IAAPI, the industry foresees an approximate Rs 1,800 crore revenue loss until December 2020. “This industry is highly capital intensive and seasonal as it operates mainly from mid-March to July. The peak season from April to June, where it would have earned 65-70% of the revenue. After June, they gain 25-35% more through school picnics and excursions. Both these periods have been lost this year,” Sarin said.

He said small parks and indoor amusement centres have been the worst affected since they rely solely on gate income. “Around 70-75% of the visitors belong to middle and lower-middle class families, who would now be financially hard-pressed to spend on recreational activities. It will take a minimum of two years for amusement parks and ride-manufacturing companies to get back to normalcy. The industry has sought a waiver of fixed charges for electricity until the parks reopen, along with the waiver taxes like Goods and Services Tax, property tax, non-agriculture tax, gram panchayat tax for a period of 12 months. We also hope that the government will extend all existing licences without any charge for one year,” he said.

Nalini Ravichandran is an independent journalist who has worked with The New Indian Express and Mail Today and reported extensively on health, education, child rights, environment and socio-economic issues of the marginalised. She is an alumna of the Asian College of Journalism.