SeaWorld’s earnings are through the roof, but the park’s future remains uncertain


Even as the hopes for a ‘Hot Vax Summer’ turned into a daunting Delta-led part deux of the past summer, SeaWorld continued to see strong visitor numbers companywide.

On August 5, when they released their Q2 results, things were looking up for the Orlando-based amusement park chain.


The morning the earnings report was to be published,  the theme park rumor website Screamscape posted a short blurb stating SeaWorld may be preparing for more cuts in the coming weeks.

“Consider this fair warning, but a little bird has informed us that rough seas may be ahead for SeaWorld Entertainment team members,” read the piece on Screamscape. Going on to explain, “As we approach the end of the 2021 Summer season, word is that the new COO, Tom Iven, that SEAS hired away from Six Flags may be behind an all new series of staff layoffs, budget cuts and cuts to future capital expansion projects.

Unfortunately I don’t know when the axe is going to fall, only that the corporate office has now begun to sharpen it ahead of the upcoming culling. Stay tuned!”

Tom Iven had spent his entire career at Six Flags, working his way up from operations in high school to becoming a senior vice president at the company. The move to SeaWorld looked promising, with SeaWorld CEO Marc Swanson stating in a press release announcing his hiring that “Tom brings significant theme park operating experience and a long, successful operating track record. I am confident he will make immediate contributions as we continue to execute on our strategic plans to realize the full, long-term potential of the company.”


On the August 5 earnings call with investors, there was no mention of the Screamscape rumor and Tom Iven wasn’t present on the call.


Then in an SEC filing on August 12, SeaWorld simply stated, “On August 11, 2021, Mr. Tom Iven advised the Company that he was resigning as Chief Operating Officer for personal reasons effective immediately. Mr. Iven will continue to assist the Company through August 20, 2021.”


In a company known for the revolving door to its executive suite, Iven’s less-than-two-month ranks among the shortest. The stint is just the latest in a long list of executives who have left the company after a promising entrance. Last year saw CEO Serge Rivera abruptly leave after just five months. His predecessor, Gus Antorcha, lasted at the helm just seven months before jumping ship. After two stints as the interim CEO, SeaWorld’s board tapped Marc Swanson to lead the company.


Still, there’s little doubt that the true leadership comes from the Board of Directors. In his resignation, Rivera pointed to “disagreements over the board’s involvement in the decision making at the company” as the reason for his departure. In April, while speaking at a private virtual event hosted by the International Association of Amusement Parks and Attractions, then still interim CEO Swanson praised SeaWorld’s board chairman, Scott Ross, who comes from Hill Path Capital, SeaWorld’s largest shareholder.


In recent years, SeaWorld has been ruthless in its cost-cutting initiatives, with multiple rounds of mass layoffs only exacerbated by the pandemic. Last year, the company received criticism when it provided $6.8 million in stock options for six executives while 90% of the company’s employees sat furloughed.


Many fans have pointed to Scott Ross and the Board as the main hand behind this steady stream of increasingly questionable belt-tightening initiatives. It’s unclear if this rumored next wave of layoffs that had been linked to Iven is part of what caused his sudden resignation, nor is it clear if this wave of new layoffs is still in the works.


SeaWorld currently has multiple new attractions ready to open but has yet to do so. It is thought this might be a cost-cutting move related to stronger than expected attendance this summer. With the year now nearly two-thirds of the way gone, some fans have begun speculating if SeaWorld plans to keep the attractions closed all year despite many of those attractions still advertised as opening this year. More layoffs at the labor-strapped park chain will certainly cause more difficulties in staffing new attractions. 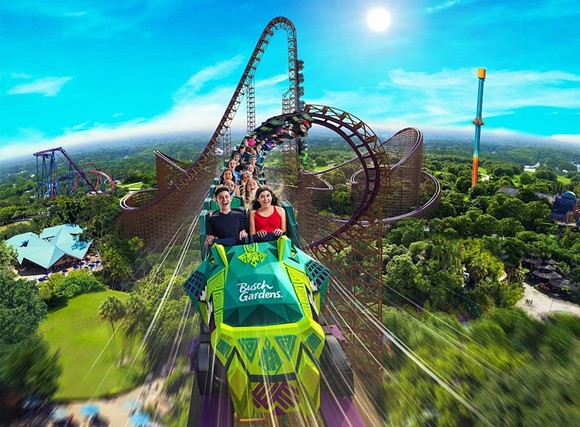 In the meantime, the company is preparing for haunt season with its largest Howl-O-Scream offering ever, with the adult-centered haunt event now offered at every major SeaWorld park chainwide for the first time. The company is also still moving forward with its third-party-operated amusement park in Abu Dhabi. It is home to the world’s largest aquarium and is expected to open next year.

During his short stint at the company, Tom Iven did reportedly ride Iron Gwazi, the still closed ‘new for 2020’ coaster at Busch Gardens Tampa.