The amazing Discoveryland at Disneyland Paris 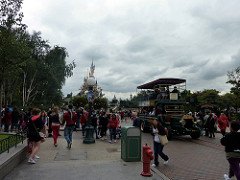 A futuristic tribute to the worlds big visionaries from European history…

In Disney’s other Magic Kingdoms around the world a part of the park called Tomorrowland gives a futuristic view of the future with rockets, Aliens and gleaming metal. Unfortunately in today’s high speed world the dreams of tomorrow rapidly become the reality of today, so here in Disneyland Paris, Disney decided to try a new angle on this area. Disoveryland is dedicated to the visionaries of yesterday and how they may have envisioned the future that we are now all a part of. Many of histories greatest visionaries lived in Europe, so here at Euro-Disney it pays them a fitting tribute, Recreating their dreams. H.G. Wells and Leonardo da Vinci feature with their ideas of time travel and flight, but the most influential visionary of all the great French author Jules Verne is the main contributor to the area.

Much of Discoveryland’s boiler plate and rivet design derives from Disney’s film adaptation of Jules Verne’s book 20.000 Leagues Under the Sea A Discoveryland attraction based on the film offers guests the chance to experience a walking tour of Captain Nemo’s mythical submarine “The Nautilus”. After passing through numerous detail rooms guests find themselves under attack from the mythical Giant Squid.

In another Verne book “From The Earth To The Moon” he wrote about mans mission to travel through space on a journey to the moon. One of Disney’s premiere attractions “Space Mountain” recreates that story through a huge indoor roller coaster experience. “Space Mountain: Mission II” is an updated version of the attraction where guests board a rocket vehicle and are loaded in to a giant cannon pointed skywards which launches, taking them through an unforgettable high speed ride in near darkness with a new soundtrack and updated effects.

Buzz Lightyear can also be found at Discoveryland. He needs the help of all the guest to defeat the Evil Zurg. At the Cafe Hyperion enjoy a bite to eat before relaxing at the Videopolis stage where Disney theme shows are performed seasonally.

The part of the land situated furthest from the entrance takes a slightly different look at the future, Through the eyes of visionaries of today. Guests have a chance to enter the world of George Lucas aboard “Star Tours”. Based on the “Star Wars” movies guests pass through an airport of the future, Here flights don’t leave for other countries, but other planets. After guests board their Star Speeder to the moon of “Endor” home of the Ewoks they discover it is the pilots first flight and he still has a little to learn about space flight…. Good Luck!

Also in this area of Discoveryland guests get the chance to visit the Imagination Institute. No longer for its the annual “Inventor of the year awards” where Professor Wayne Salinsky demonstrates his amazing shrinking machine but to re-visit the Captain EO revised attraction. Michael Jackson is back with his odd space crew to share his special gift of music and dance with the “Supreme Leader” to convince her of her inner beauty.

Owner & Publisher I've been around since day one. Can't believe we've been together for over 17 years! Thank you for making ThrillNetwork an amazing experience. What an awesome ride!!!
NEWER POSTSan Antonio TX Charter Bus-Why So You Need One For Your Upcoming Trip?
OLDER POSTWalt Disney Worlds Vision For A New Downtown Disney Marketplace Unveiled
Privacy & Cookies: This site uses cookies. By continuing to use this website, you agree to their use.
To find out more, including how to control cookies, see here: Cookie Policy