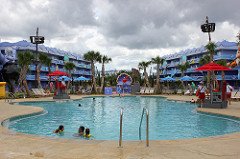 Walt Disney World officials unveiled a new vision for Downtown Disney with plans for new shopping, dining and other experiences, including a completely reimagined Pleasure Island. Also on tap are numerous enhancements to existing Downtown Disney locations, as well as additional theming and storytelling by Walt Disney Imagineers.

According to Downtown Disney Vice President Kevin Lansberry, the changes will be made in response to guest’s needs. “Our guests have been asking us for additional shopping and dining experiences at Downtown Disney for quite a while,” he said.

Downtown Disney will get a new iconic attraction on the West Side, a giant tethered balloon that will transport guests 300 feet into the air to give them amazing views of the Walt Disney World Resort. I can guarantee you that all of us here at Disney Exclusive Online will be the first in line.

One of the first changes already seen by guests and Cast Members is the refurbishment of the stage in the Downtown Disney Marketplace area. It has been replaced with a larger, covered stage that will serve as a venue for Disney’s Magic Music Days performance groups.

For the Disney shopping enthusiasts, Hanes is adding a design your own t-shirt store to the growing collection of Authentic Disney Theme Park Merchandise, which guests can personalize at The Downtown Disney Marketplace. Also, Fulton’s Crab House will update its interior fixtures and furnishings as well as its exterior.

On the West Side, Wolfgang Puck Cafe will update its interior fixtures and furnishings and enclose its patio with glass to enable guests to enjoy outdoor seating year-round. On Disney’s Pleasure Island, here is what to expect from changes to the dining experiences. Portobello Yacht Club will transform into Tuscan Country Trattoria, a restaurant featuring family style dishes and a redesigned interior and exterior, including additional outdoor seating.

Also, The Downtown Disney Marketplace has been invaded by prehistoric creatures, don’t worry they seem tame. Yes, all of us here at Disney Exclusive Online love the new T-Rex restaurant. T-Rex at Disney’s Marketplace is a Prehistoric family adventure, operated by Landry’s Restaurants of Houston. The family eatery offers pizzas, pastas, seafood and more, featuring life size animated dinosaurs who dwell among bubbling geysers, waterfalls and a fossil dig site. T-Rex is amazing and where could a restaurant of such Prehistoric nature exist, except The Walt Disney World Resort.

E-brands restaurants, an Orlando based, multi-concept restaurant group, will premiere its newest concept this spring. The high energy, casual eatery will feature authentic Central and South American cuisine, specialty drinks and live music along the waterfront. “The new offerings and enhancements planned for Downtown Disney will position us to deliver a more immersive experience for our guests,” Kevin said. “We feel that this diversified mix of food, shopping, and entertainment will create an even more appealing family atmosphere for our guests planning to visit Downtown Disney during their vacations.”

To make way for all the new offerings, all of the clubs at Disney’s Pleasure Island have closed. Other locations, including Raglan Road, Fuego by Sosa Cigars, Curl by Sammy Duvall, Orlando Harley Davidson, and outdoor food and beverage locations, will remain open during the transition. Walt Disney World is a resort of constant enhancements, and the exciting changes at The Downtown Disney Marketplace have many guests excited. It’s just another day in the world of creating magic, and this goal was Walt’s dream.

Owner & Publisher I've been around since day one. Can't believe we've been together for over 17 years! Thank you for making ThrillNetwork an amazing experience. What an awesome ride!!!
NEWER POSTThe amazing Discoveryland at Disneyland Paris
OLDER POSTDubai – United Arab Emirates: A Great Family Holiday {image]
Privacy & Cookies: This site uses cookies. By continuing to use this website, you agree to their use.
To find out more, including how to control cookies, see here: Cookie Policy