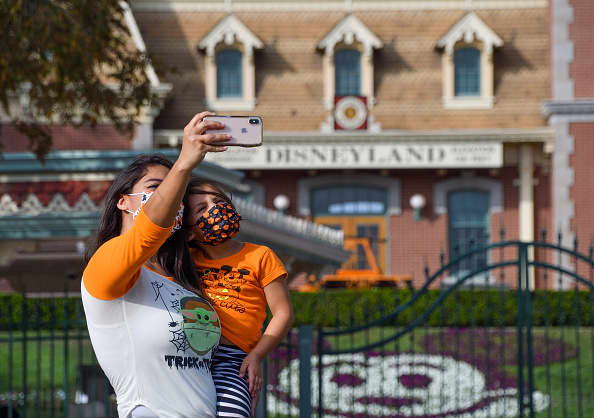 Brittany Losey takes a picture with her daughter Madison Losey, 7, outside the entrance to Disneyland at the Disneyland Resort is closed in Anaheim, CA, on Thursday, October 22, 2020.

Before the pandemic Michael Afram’s transportation company was averaging 450 to 500 rides a day in the area between Los Angeles and San Diego. A hefty percentage of Karmel Shuttle Service’s destinations were Disneyland, Universal Studios and SeaWorld San Diego.

With theme parks in California shuttered and air travel demand at a fraction of what it was in 2019, Afram’s business only had 140 transports for the whole month of October.

Around 50% of Afram’s business was in the Anaheim resort area where Disney’s two California parks and its Downtown Disney shopping center is located. His shuttle company traveled to local airports, hotels, theme parks, restaurants and other local tourist destinations in the area.

The other 50% included the greater Orange County area as well as Los Angeles, where Universal Studios is located, and day trips to San Diego.

Without the tourism boost from Disney’s parks, Karmel Shuttle Service’s revenue is down more than 95%, Afram said.

As it stands, theme parks in California will remain shuttered well into 2021, as state guidelines prohibit reopening until coronavirus cases in counties fall below one per 100,000 — a target that will be difficult to achieve as cases soar throughout the country. This prolonged closure will be a massive drag on Disney’s earnings for quarters to come and exacerbate the financial difficulties that local businesses are facing during the pandemic.

Thousands of jobs at risk

“It’s completely unattainable right now,” Afram said. “I’m not sure how and why Disney as a corporation is able to follow protocols, set up procedures and guidelines and open up in Orlando and Paris and Shanghai and Tokyo, but in Anaheim for whatever reason they can’t do the same.”

California Gov. Gavin Newsom has raised concerns over the number of people who typically frequent theme parks, the duration of the time they spend there and the possibility that transmission rates could rise if the parks are reopened.

“I believe that the guidelines set forth by Governor Newsom were released with the right framework and message of prioritizing public health and safety for both theme park employees and guests.” she said.

“However, as we have seen the economic impact this pandemic has had on all business sectors, we can acknowledge that public health and economics are not exclusive from each other,” she said. “I have voiced my concerns about the state’s guidelines having a significantly negative impact on thousands of jobs, small business, and ultimately billions in revenue for California. I would urge the Governor and his administration to review the numbers and encourage them to update the guidelines for our theme parks.”

Last year, Disney’s parks, experiences and consumer products segment was its fastest-growing profit driver. Since the outbreak began, Disney has been hemorrhaging cash. In the second quarter, the company reported a loss of $1 billion in operating income due to the closures of its parks, hotels and cruise lines. In the third quarter, the company reported a steeper loss of $3.5 billion.

On Thursday, the company said the Covid-19 outbreak cost its parks, experiences and products segment around $2.4 billion in lost operating income during its most recent period. The company expects its California parks will remain closed through the end of this year.

The coronavirus pandemic has caused many headaches for Disney. The company has faced movie theater closures, film and TV production shutdowns, docked cruise ships and the suspension of most live sporting events. But the blow to theme parks has been huge.

While Disney has been able to reopen in Florida, Shanghai, Japan and Hong Kong with limited capacity, its Paris theme park was closed in late October amid a resurgance of Covid-19 cases and will not reopen until 2021.

With its California parks unable to open, Disney laid off 28,000 workers across its parks, experiences and consumer products division in September. Then earlier this week, the company announced additional workers at its California theme parks, including executive, salaried and hourly employees, will face furloughs. Disney didn’t disclose the number of impacted workers.

“In 2020, Disney was forced into damage limitation mode and their Covid hangover looks set to linger with businesses such as their theme parks not expected to get back to full swing for 12 months,” said Joe McCormack, a senior analyst at Third Bridge research firm.

Florida as a model

Coan, a theme park attractions developer and a former Walt Disney Imagineer, said Disney’s Florida reopening is a template for what could happen in California. So far, there have been no indications that the parks in Orlando have been responsible for any coronavirus outbreaks, he said.

Even with limited attendance, demand is rising, Coan said. While there are fewer international guests and guests from out of state, folks who are able to drive to the parks are doing so in droves.

“They may not stay for seven days, but they are coming in and going to the park and demonstrating that it can work,” he said.

Republican State Senator Patricia Bates, who represents southern Orange and North San Diego counties, visited Disneyland a few weeks ago and told CNBC that she was “really quite impressed” with the safety measures that the company has put in place at the parks. She also visited Downtown Disney and witnessed guests adhering to Disney’s social distancing guidelines while shopping and dining.

Bates worked at Disneyland during her time at Occidental College in Los Angeles and believes that the parks should be able to open sooner than the current state guidelines would permit.

“Opening them up is vital to the local communities,” she said, explaining how small businesses in the surrounding counties rely on the tourism generated by Disneyland and other parks in the area.

Not to mention, the majority of the workers who were laid off two months ago, live in those local counties.

A couple waits in line to enter Downtown Disney in Anaheim, California on July 9, 2020, the first day the outdoor shopping and dining complex has been open to the public. (Photo by Robyn Beck / AFP) (Photo by ROBYN BECK/AFP via Getty Images)

“Many of our hard working residents will be struggling and that is something that Californians cannot afford,” said Quirk-Silva.

Andrea Zinder, president of UFCW 324, the labor union that represents all of the retail employees at Disney’s two parks and at Downtown Disney, said members are eager to return to work. Many were recalled to work at the shops at Downtown Disney and at Buena Vista Street, a restaurant and retail area within one of Disney’s parks. But others are still waiting.

“We would like to see the state allow Disney to reopen with reduced capacity once Orange County is in the ‘orange’ tier,” Zinder said. “Disney has implemented many safety protocols over and above those required by the state and is also offering regular testing to all employees.”

The orange tier in California is when there are between one and 3.9 cases per 100,000 residents. This is the category that theme parks had hoped the state would use to permit them to reopen.

The worry is that while big companies like Disney will be able to weather the pandemic — leaning on revenue from other parts of its business like streaming, consumer products and advertising — smaller businesses won’t be around when the storm ebbs.

“[Big theme parks] have deep pockets, which make them very sustainable, but my pockets are just the pockets I have in my pants,” Afram said.

Disclosure: Comcast is the parent company of NBCUniversal and CNBC.