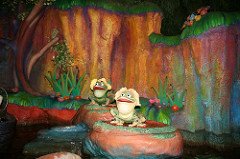 Perhaps you have been dreaming of being present when the cathedral city of Worcester, England joins with Gloucester and Hereford for the Three Choir Festival with its “music across the centuries”. Can’t manage it this year? Why not visit Worcester, Massachusetts – which got the nickname “Wormtown” because of its underground musical subculture. Worcester boasts of one of the nation’s first and most beautiful major parks – Elm Park, which was designed by Frederick Law Olmstead, a designer of Central Park in Manhattan. It is listed in the National Register of Historic Places.

For those interested in firearms, Worcester has the Higgins Armory Museum with the largest collection of arms and armor in the western hemisphere. Also, it is home to the American Antiquarian Society, and several other museums in various areas.

Worcester’s Union Station has been renovated in the French Renaissance style, and is home to the FDR American Heritage Center Museum and Special Collection Showcase. For those who like quirky landmarks, Worcester has the American Sanitary Plumbing Museum, home to a collection of toilets and sinks from various periods of history. On the south side, “The Turtle-Boy Love Statue” features a boy and a turtle where imaginations run wild about the meaning and appearance of the statue.

Don’t worry about the several pronunciations of the city’s name. Residents are used to hearing “Wuster”, “Woosta”, Worchester”, and a few others, and only focus on making your visit enjoyable.

Heard about the “Ring of Kerry” – the 134-mile bicycle route that starts and ends at Killarney and passes through the most beautiful countryside in Ireland, eh? Maybe it’s the “Killarney Hog Rally” with over 5,000 motorcyclists in attendance that interests you… or the famous “Irish Red Deer”… or the three world-renowned Killarney Lakes… the floodlit castles… so much to see in Killarney, Ireland. But funds are low right now, so why not visit Killarney, Florida the “green” suburban retreat to calm one’s nerves after visiting the boisterous Disneyworld in nearby Orlando.

Killarney has access to no less than nine parks, ranging from the Lower Wakiva River Preserve State Park, a 17,650-acre preserve, nature walk and horse trail, to the tiny Turkey Lake Park. Killarney also covers activities such as scuba diving and snorkeling, paddle boating, museums and theaters, biking and more.

From the downtown Lake Eola Park visitors can go out on the lake and get a magnificent view of the area skyline. The Hontoon Island Park is accessible only by boat or ferry and is a picturesque place where visitors to the island can enjoy canoeing, nature walks, and just plain relaxation.

So go ahead and enjoy Disneyworld, Killarney residents say… but “Come to Killarney to refresh and experience the quieter side of Florida”.

Glenn H. Kipps is the owner of http://www.validtravel.com/, a travel resource. There are over 100 articles to browse through and over 700 products by Coleman to look through in our new adventure travel catalog. ValidTravel.com is also affiliated with Samsonite. There is a free newsletter.

Owner & Publisher I've been around since day one. Can't believe we've been together for over 17 years! Thank you for making ThrillNetwork an amazing experience. What an awesome ride!!!
NEWER POSTTwo People Injured in Amusement Park Accident in Buena Park
OLDER POSTCheap Disneyland Vacations – How to Bring the Magic Kingdom’s Bill Back to Reality
Privacy & Cookies: This site uses cookies. By continuing to use this website, you agree to their use.
To find out more, including how to control cookies, see here: Cookie Policy